Last Updated on September 17, 2021 by Christina

Many families have always had the impression that Rving requires you to be either rich or famous. However, that could not be further from the truth. The misconception that the only way to RV is with a $300,000 Class A Motorhome, is quickly being put to rest. The majority of RV’s that are sold these days are travel trailers and other towable units, which come with an average price tag under $30K.  The truth is they are cheaper than most family cars.

The market for RV’s is also growing. While retirees still continue to buy them at a high rate, as they always have, there has been an influx of young families purchasing RV’s. Young families are starting to see how cost effective Rving can be when compared with other pricier vacation options. In fact, a study which was recently cited by the Oakland Press stated; “For a family of four, Rving costs as much as 69% less than other types of vacations.”

Campgrounds are noticing a rise in business too. Oakland County’s Addison Oaks Campground is seeing campers come in numbers not seen since the 1980’s. Michigan’s Department of Natural Resources also reports an increase of 17% in the number of campers from a year ago.

When the recession hit, families looked for ways to emphasize spending time together, but doing so while on a budget, and camping has always offered that. Now, with the economy recovering, people are still emphasizing family. The difference is, many more now see a reasonably priced RV as a viable vacation option.

If you are thinking about beginning a new adventure in Rving, stop in to one of General RV Dealers 10 locations today or call our Internet hotline at 888-436-7578. A General RV staff member would be glad to speak with you about the affordability of Rving, or even show you a few units 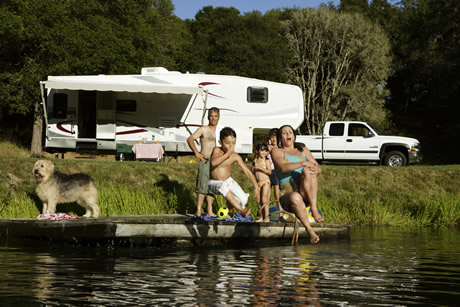