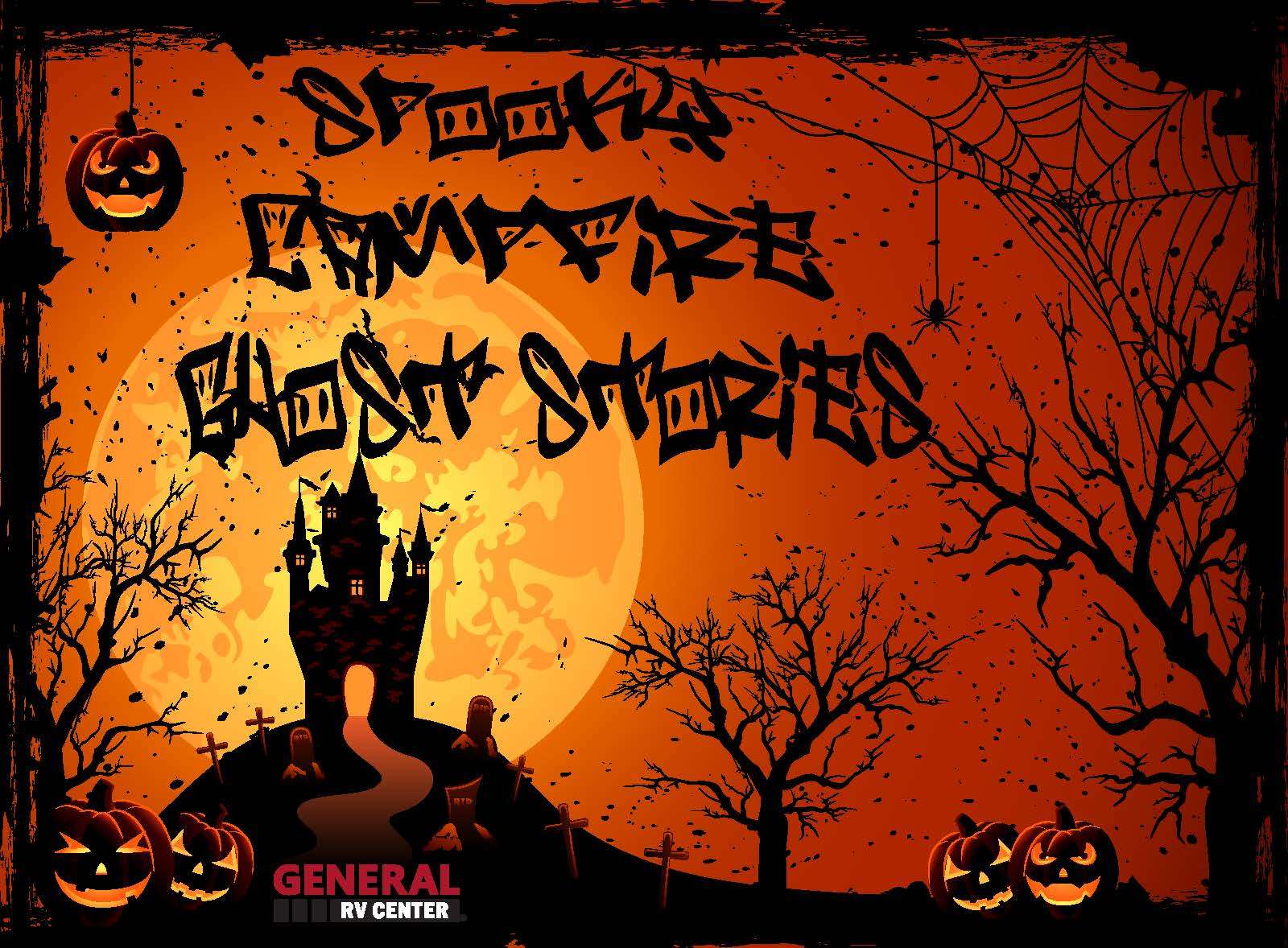 There’s nothing like a good ghost story told around a campfire. After scouring the Internet, here’s some classic creepy tales you might remember, as well as some new ones. Happy Halloween!

Lost in the Woods

Scare factor: 4 out 10 (appropriate for all but the very youngest)

Premise: With an accomplice hiding nearby in the woods, the storyteller tells how it was on a night just like this one when a girl named Cassie got lost in the woods while camping with her Girl Scout troop. The adults went to find her, and the lost girl found her way back, but the troop leader never made it back. They say if you listen quietly, you can hear the troop leader calling her name. At this point your accomplice waits a moment for the silence to set in, and then shrieks “Cassie!” making everyone jump.

Notes for telling: Great for campfires. The payoff is when the accomplice makes his entrance, so be sure to build the suspense.  Speak softly at the end, so everyone is very quiet right before your accomplice bursts onto the scene. Change out Cassie for the name of someone in the group.

Premise: Bloody Mary was a witch who lived in the woods and stole the villagers’ daughters so she could drink their blood to regain her youth. The villagers captured her and burned her alive, but not before she cursed them, saying she would exact her revenge on anyone who repeated her name three times while looking in a mirror.

Notes for telling: At the end of this classic ghost story, pull out a hand mirror and dare anyone to say Bloody Mary three times. Bonus points if you have an accomplice jump out of the woods if anyone takes the dare.

Scare factor: 5 out of 10 (appropriate for most children)

Premise: A boy accepts a dare to visit a grave at night. To prove he completed the dare, he says he will stick his pocket-knife into the ground at the foot of the tombstone. After doing so, though, he couldn’t move. Try as he might, he couldn’t get away, something was keeping him from leaving. After the boy never went to school the next day, his friends investigated and found the boy lying dead on the grave. He had stuck the knife into the ground, but he had stuck it through his coat. He died of fright.

Note for telling: There is no “gotcha!” moment, so the scare is in the description. Make it a dark and creepy night with the wind howling and bats flying and the boy as nervous as can be.

Humans Can Lick Too

Premise: Girl left home all alone at night hears dripping noises from her bed, but every time she goes to check, she finds nothing. Each time she gets back in bed, she feels secure when her “guard dog” licks her hand from underneath the bed. Until finally, she checks her closet and finds her dog hanged and dripping blood in the closet with a scrawled note that says, “Humans can lick, too.”

Notes for telling: Build up the suspense by dragging out these scenes and slowing down the parts right before the “dog” licks her hand yet again.

Scare factor: 6 out of 10 (appropriate for older children)

Premise: Teenage boy drives his date to a deserted Lover’s Lane for some late-night smooching. While he and the girl are kissing, the radio cuts to a news bulletin warning the public about a murderer — who just escaped from a nearby asylum! — with a hook in place of his right hand. The girl flips out and insists they leave, and after trying to appease her by locking the doors, the boy reluctantly agrees. Upon arriving at the girl’s house, she gets out of the car and begins shrieking in terror: hanging from the door handle is a bloody hook.

Notes for telling: Make a big deal about how the boy hastily drove away from Lover’s Lane, to support the notion that the hook might have been caught in the door because he sped off.

Aren’t you glad you didn’t turn on the light?

Premise: Two girls share a college dorm room together. They go out partying one evening, and one of the girls, Meg, returns to their room and retrieves her purse without turning on the lights. Later, the second girl, Julie, heads back to the room to sleep. Meg stays out until late, at which point she returns to find a bunch of police officers outside her dorm. They try to restrain her, but she insists on entering — where she sees her bloodied dead roommate, and written in blood on the wall, “Aren’t you glad you didn’t turn on the light?”

Notes for telling: This one’s all about the creepy payoff, so take your time leading up to it. Like all ghost stories, there are a million versions of this one — some have Meg coming back to sleep and discovering Julie in the morning, etc. Whatever seems spookiest!

Scare factor: 1 out 10 (appropriate for all ages)

Notes for telling: The idea here is to build as much suspense as possible before you leap forward and dramatically shout the jellybean line. You’ll know you did it right if your audience reacts by instantly pooping their pants.

See you next week when we pass along an “RV Checklist of Things You Need To Do When You Arrive & Before You Leave.”