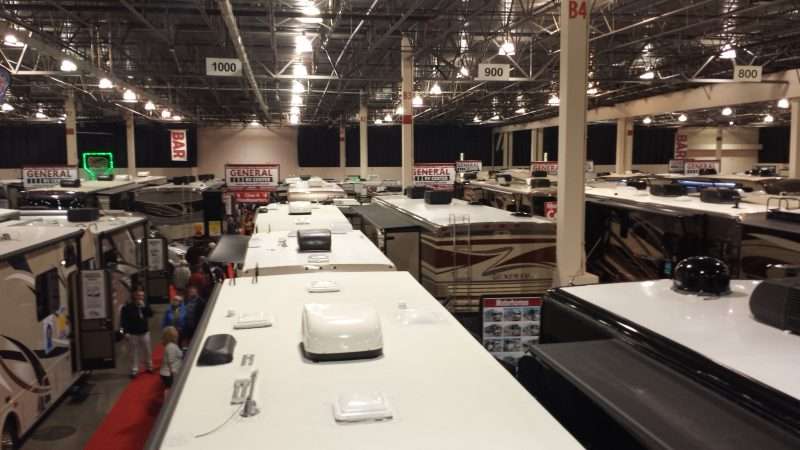 Here at General RV Center we love RV show season, it gives us an opportunity to meet face
to face with our fellow campers, and get an idea of the current state of the market.  The Detroit Camper & RV Show held this past weekend at the Suburban Showcase in Novi, MI was one of the most exciting shows thus far; with record breaking attendance and excited faces everywhere.  The show’s success was spread Nationwide with articles on the RV industries rise being featured in USA Today and The Detroit Free Press.  Check out what the National news outlet had to say about General RV Center & the rising trend of RVers.

NOVI, Mich. — Despite frigid weather, a stretch of I-96 here is sizzling this week as a hotspot of recreational vehicles, which as an industry is enjoying one of the nation’s most robust comebacks.

On the south side of I-96, at the Subruban Showplace, the five-day Detroit Camper & RV Show is under way through Sunday. Fueled by cheap gas and a wave of retiring baby boomers with money to spend and time to travel, the industry, which has its hub in northern Indiana, is adding manufacturing capacity after a severe retrenchment period.

Whether in search of more comfort for longer trips or just because manufacturers are packing more creature comforts into the products — flat-screen TVs, theater seats, heated ceramic tile flooring — transaction prices are moving up, too.

Products on the RV show floor this week range from a tiny Cricket Trailer designed by a NASA engineer that can be set up in five minutes and towed by any four-cylinder vehicle, to a giant 45-foot-long American Coach motorhome, with a 600-horsepower engine, a residential walk-in closet and a list price of $689,000.

One exit to the west of the RV show, General RV Center, the nation’s largest family-owned RV retailer, has just launched its huge new showroom and corporate headquarters on the site of the former Ford Wixom assembly plant, which shut down in 2007.

Loren Baidas is president of General RV, a company his grandfather Abe started in 1962. It has grown to 11 superstores, six in Michigan and one each in Ohio, Utah and Chicago, and two in Florida — in Jacksonville and Tampa. Baidas said its new showroom/headquarters sits on 34 acres and employs 200 of the firm’s nearly 1,000 employees nationwide.

“Our sales were up 15% last year and have been up every year since 2009,” Baidas said. “Lower gas prices have something to do with it, but they have more to do with how far people drive than the actual decision to buy. Instead of going close to home, to a local campground or the U.P., they might take a trip to Disney or to the Smokies.”

RV sales are watched closely as an industry barometer, because they tend to rebound faster in good times and crash harder during downturns, Walworth said. RV sales rebounded rapidly after the sharp dip that followed the 9/11 terrorist attack in 2001. But in 2009, sales fell to 165,000 units, nearly 60% below three years earlier.

If you missed the Detroit Camper & RV Show you can check out our upcoming events & RV shows on the General RV App | Available on Google Play & iTunes.