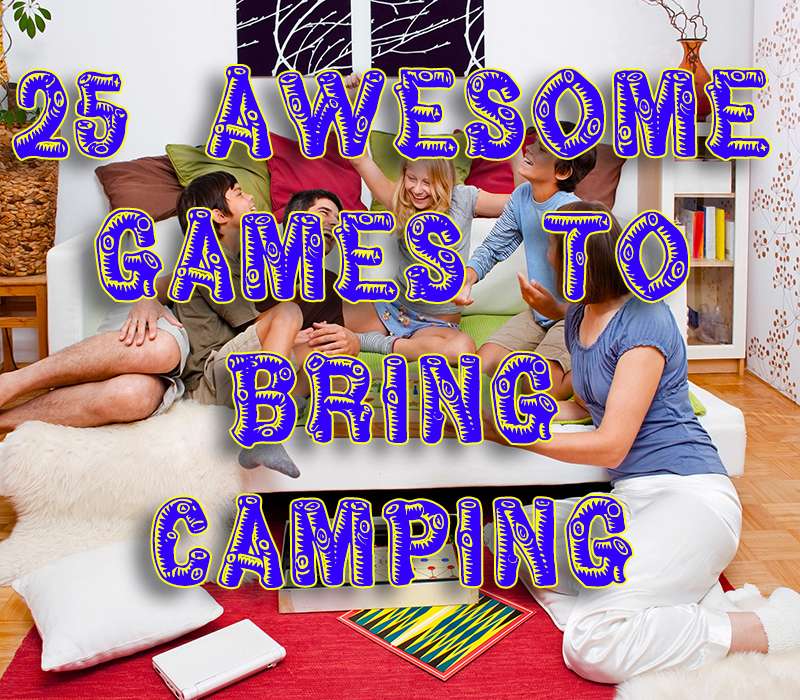 When we’re camping, I’m perfectly content to sit in my chair with a cold beverage in one hand and a s’more in the other.

But there are plenty of times when I’d rather play a game. Indeed, when one of my kids challenges me to a game of cornhole, my inner competitor awakens and I leap to action, ready to crush my child’s silly dreams of victory over their old man.

But I digress. And you’re reading this post not to learn of my mad skills, but because you want to know of some games to play when camping. And I’ve got plenty of them!

Let’s break this down a couple of ways. First, we’ll have games for both kids and adults. Second, we’ll have games to be played outdoors when the weather is good and inside the camper when it’s raining (and trust me, it always seems to rain during a camping trip at least once a season).

Note: We have a no electronics rule when we camp, so for this post I’m not going to mention any games involving Nintendo, Playstation or the like. If that’s not your rule and you were hoping I’d list some video games, sorry. But here’s some free advice: Camping is meant to disconnect from the real world so you can reconnect with each other. Leave the electronics at home. 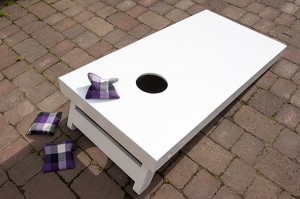 Cornhole: It’s a lot like pitching horseshoes, except with beanbags and boards instead of horseshoes and poles. The 2-x-4 boards, each with a circular hole cut out of one end and set at a slight slant, are placed about 20 yards apart and facing each other. Then, teams of 2-to-4 players take turns tossing the beanbags onto the boards. Points are scored when a bean bag stays on the board or falls through the hole. It’s harder than it sounds, and it’s a whole lot of fun. Pro: Lots of fun for the whole family. Con: Takes up a lot of room in the camper. 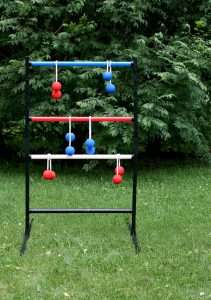 Ladder Golf: Similar to cornhole, except the beanbags and boards are replaced by golf ball boleros and plastic pipes formed into a ladder. Points are scored when the golf ball boleros wrap themselves around the horizontal piping. To be honest, we tired of ladder golf rather quickly. But hey, that’s just us. You might love it forever. You can find a travel Ladder golf set. which makes it easy to take with you! 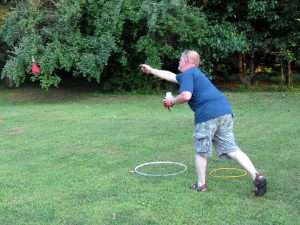 Jarts: An oldie but a goodie. Players take turns throwing Jarts, which resemble over-sized darts, at a large circle laid on the ground. Points are scored for Jarts that land in or closest to the circle. In the original version, the Jarts had a pointed end and actually stuck into the ground. The newer version no longer has the pointed end, instead a weighted ball.

Frisbee/Football/Baseball/Basketball: You need something to throw back and forth. You also need a basketball in case the campground has a court. Bonus: With two baseball, two gloves and enough kids, you can get an awesome game of pickle going. Every camper should have some/all of these on board at all times.

Geocaching: Geocaching is something the whole family can do. All you need is a handheld GPS device (about $150), and then you find a tiny container hidden somewhere in a park or other public place. Several websites keep track of cache locations and provide GPS coordinates. Plug those coordinates into your handheld GPS device, which will get you within 10-20 feet of the cache. The cache never holds anything of value, but the fun is in the hunt.

Washers: Washers combine elements from horseshoes and a variety of other yard games to provide hours of indoor and outdoor fun. Bulls-Eye Washers is played with 2-4 players divided into (2) teams with (2) square wooden game boxes placed 20-feet apart at opposite ends. Players or teams pick a colored set of washers or bean bags and use that set throughout the game. POOF-Slinky 0X0728 Ideal Bulls-Eye Washers is recommended for children 8-years of age and older. 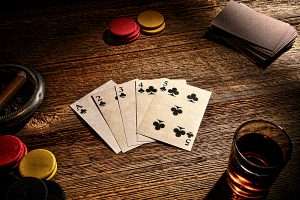 Playing Cards:  These are a no-brainer. They take up hardly any space and, especially with playing cards, the games are nearly limitless. Just to name a few….

Yahtzee: Another must-have. Roll the dice and try your luck. Points are scored in various combinations of the die, including straights, three- and four-of-a-kind and the elusive Yahtzee. 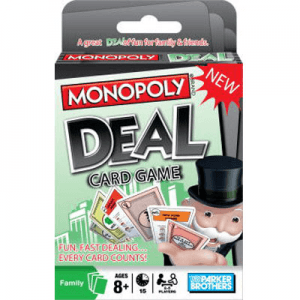 Monopoly Deal: You’ve got it my friends, Monopoly has been dissected and put into a travel friendly box of cards!  It’s a great game for just 2 people or an entire group.  You get all the fun of the classic game with some great twists! Monopoly Deal can be found at your local retailers like Target or Walmart or online at www.hasboro.com .

LCR: LCR is a tiny game and a ton of fun. It has three dice, each marked with three dots, plus an L for left, a C for center or an R for right, which is where the name comes from. Each player has a predetermined number of chips (or coins, or pretzels, or M&Ms …). Each player takes a turn rolling all three dice. If an L appears on one of the die, then that player must give on chip to the player to his or her left (or to the right if an R appears). A dot means the player can keep their chips that round. Last player still with chips is the winner.

Jenga:  An oldie but goodie.  Jenga is a tower of fun!  Each player must take a piece out of the tower without knocking it over, first player to make the tower fall looses, pretty simple.  If you want to kick it up a notch you can write truths/dares on each piece that the player who pulls it must complete!  You can find Jenga at your local Target or Walmart.

Apples to Apples: We have this card game with us on every trip. The party game consists of two decks of cards: Things and Descriptions. Each round, the active player draws a Description card (which features an adjective like “Hairy” or “Smarmy”) from the deck, then the other players each secretly choose the Thing card in hand that best matches that description and plays it face-down on the table. The active player then reveals these cards and chooses the Thing card that, in his or her opinion, best matches the Description card, which he awards to whoever played that Thing card. Once a player has won a pre-determined number of Description cards, that player wins. If you don’t have this game, you need to get it. There’s an Apples to Apples Junior version, too. 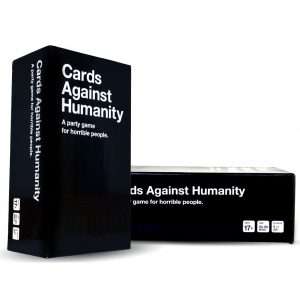 Cards Against Humanity:  No kiddos for this game, which has been described as an adult version of Apples to Apples. The active player reads what’s written on a Black card, which will have a blank space in it. Remaining players then select a White card they feel has the most appropriate response to fill in the blank. This party game easily devolves into horrible debauchery, and it’s a load of laughs — as long as you have the right crowd.

Scrabble: Another oldie but a goodie. A word of warning: Make sure the box is secured during transit otherwise you’ll be finding letter tiles every time you clean the camper for years to come. Not that this has ever happened to us.

Board Games: Depending on how many little ones are on your camping trip, you likely will need a handful of board games for younger children.  Can’t go wrong with the classics like Candyland, Life, Hungry Hungry Hippos and Operation!

So there you have it. My super duper list of games to play for kids and adults. I’d really be interested in hearing of some other games, though. Please list them in the comments.

See you next week when we talk about “Favorite Campfire Recipes.”